Modern media culture is comprehensive, responding to the basic mass audience need in entertainment. The entertainment component is actively being introduced into the different spheres of media space, transforming traditional media formats. American journalism provides a lot of materials for analyzing various manifestations of comic forms. We could mention the musical and humorous program “Saturday Night Live” on the NBC channel, parodying political elite and received a TV Emmy award this year.

In the “Journalism” section 7 reports were made (out of 9 applications). Several reports were devoted to the genre peculiarity of the embodiment of the comic. Karine Chobanyan turned to the satiric rubric “RedicuList” of the information program “Anderson Cooper 360” on the CNN channel and defined it as an “informational feuilleton”. Svetlana Kanashina settled on the genre nature of popular Internet memes. She stressed the syncretic: textual and graphic components that outplaying the cliches of the American mass consciousness.

In the center of the next two reports was the figure of the USA President Donald Trump. Elena Pavlova emphasized the following important point: Trump appearance on the political arena marked a departure from the discourse of political correctness prevailing over the past decades. Annihilating irony and sarcasm were played a special role in departing from this established practice of public internal political polemics. In the Valery Terin message there was a thought that through Twitter Trump proposed a new type of electronic communication, different from the linear sequence of typographic culture.

The Nikolai Zykov report filled the usually vacant niche. It was dedicated to the “The Voice of America” broadcasting, combining literary and political humor.

Finally, two more reports were devoted to the print press. It is noteworthy that the appeal to the press was brought to the historical context. Yekaterina Zagvozdkina spoke about the ironic coverage in the late 1950s and early 1960s press the image of the “broken generation”, who had denied traditions and social norms.

In Yuliya Balashova report were determined the main stages of the American almanacs evolution, with their satirical variety accentuation. American almanacs developed mainly within the framework of popular and mass culture, invariably retaining their calendar prototype. Such diverse presidents of the United States, like Franklin Roosevelt, and then Richard Nixon, addressed the satirical almanac-calendar form, for the purpose of political PR.

Galina Lapshina summed up a certain result, drawing attention to the points of convergence of American and Russian culture. 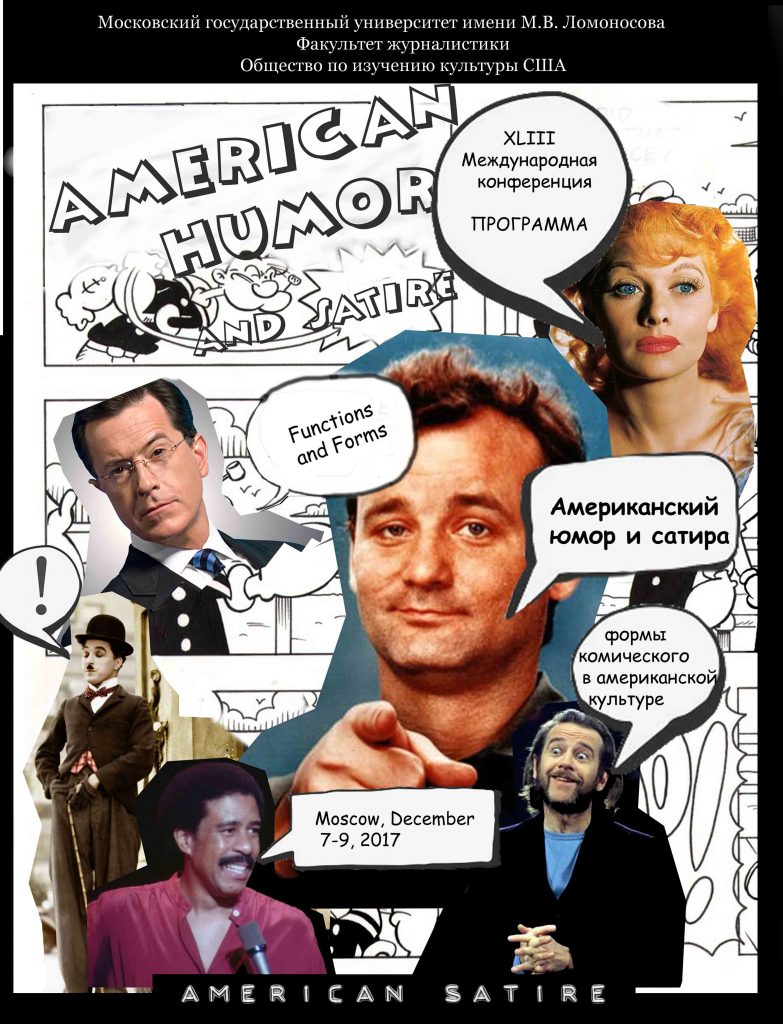 Greetings to the Conference participants

Mark Twain had a profound notion about the irregularities, disparities, and laughable nature of American Life, Religion, and Pretensions.

American anecdotes, many of them in the Twain tradition, know how to send up our national and personal pretensions: from politics to religion, from medicine to psychiatry, from legal life to the after-life in both heaven and hell.

Initially there were two extreme trends in the American humor from the times of Benjamin Franklin: the first is pursuit of established and true facts and drive for serious social and moral thought and criticism; the second is exuberant fantasy and wild grotesque imagery in tall tales of the frontier and romantic extravaganzas of Washington Irving and Edgar Poe. Mark Twain was the perfect master of both extremes and combined them in his works: he did it in a short letter on St. Patrick; he wrote at the same time phantasy of a young Satan making miracles and political pamphlets versus tyranny, chauvinism, and imperialism. Therefore, he was generally recognized as the maker of the American comic tradition.
The American culture developed as open and responsive to many world traditions, and its character was plural and complementary from the beginning of the 19th century. Mark Twain followed not only Shakespeare and Franklin but also Cervantes and Voltaire, he knew his direct precursors – tall tales and works of literary clowns of the South-West. In the age of multiculturalism the American humor absorbed new elements especially of Afro-American and Jewish laughter notably in cinema, and stand-up comedy in the halls and on TV.
Staginess and visual appeal were important features of the American humor from the times of Mark Twain: comic speech was mainly vernacular and used extralinguistic means – facial expression, gestures, tone, intonation, and persona at last. This drift increased in the last century when humor expanded into new visual arts – cinema and TV , performed in media culture with its collective authorship and industrial creation. Artemus Ward and Mark Twain did their work single-handed, Woody Allen and Jon Stewart work in groups of coworkers. For example, Jon Stewart made his satirical news program The Daily Show with more than 30 co-authors. It is impossible to host a comic show 4 days a week and 42 weeks in a year otherwise.
Polyphony and dialogism are the main patterns of fiction and humor of Mark Twain and contemporary American comic writers and showmen. They try to debate and travesty the traditional and authoritative discourse. Limits of tolerance changed greatly from the times of Mark Twain, but the burden of humor remains as ever: laughter breaks social rules and moral standards. Its backbone is to say the truth and reject all lies in contemporary society under any circumstances.

Especially important for intercultural communications are those media which are not compromised by propaganda or ideological battles. The almanac as a type of publication is this kind of media. Historically, almanacs were widespread in the USA, as in many countries in Europe and Asia. A comparison of the historical path of the almanac’s development in the United States with other countries gives reason to make a conclusion about the particular pragmatism of the American culture in the whole. This feature manifestation is the almanacs satirical variety development in the United States.

The development of information technologies and the emergence of the Internet have led to the evolution of traditional comic genres in the USA. A unique cultural phenomenon – internet meme – appeared within American internet communication 15 years ago (see picture 1). Broadly speaking the internet meme is an internet communication phenomenon consisting of verbal (textual) and non-verbal (visual) components and having a special square design. It is typical of internet memes to be humorous, topical, expressive, and the humor is often original and goes beyond the bounds of all the conventions. To convey humor the authors of internet memes use different means, for example, pun, allusion, grotesque, absurd. Different real facts of American life, famous people, events of social importance are laughed at in internet memes. Thus the internet meme can be regarded as a modern comic genre in the USA which keeps the tradition of independent and authentic American humor.

The US Late Night Comedy Shows give politicians opportunities to present their programs, strengthen the existing image, or ruin a negative stereotype. TV humor-shows make it possible to reach the audiences that are not much aware of politics, young people being among them.
The role of Comedy Central‘s projects: The Daily Show with Jon Stewart (2000 – 2015) and The Daily Show with Trevor Noah (2015 – present), in forming the political agenda are being analyzed in the report.
The style, themes, approaches to picking up guests and interviewing them of The Daily Shows’ are compared with those in The Late Show with David Letterman (2000 – 2015) and The Tonight Show with David Leno (2000 – 2014).

END_OF_DOCUMENT_TOKEN_TO_BE_REPLACED

The XLIII International conference of the Russian Society of American Culture Studies will be held  December 7-9, 2017 at Lomonosov Moscow State University Journalism Department. Its theme – “American Satire and Humor: Forms of Comic Expression in American Culture”.

Sections: Journalism, American Culture of the 17-19th Centuries, Contemporary Literature and Culture, Ethnic Aspects, Gender Studies, Fantastic in the Arts, Canadian perspectives. A traditional Round Table discussion: Imprints – Image of America and Image of Russia will be held and a Round Table dedicated to Henry Thoreau’s Bicentennial.

Official languages of the conference are English and Russian. All participants will understand papers given in English and will provide an English resume of their talk if given in Russian.

Deadline for abstracts – September 10, 2017 (half a page). Please send them all to larmih@gmail.com

On the basis of delivered and discussed papers an annual bilingual collection is published.

Information about visa support:  As it is a lengthy process – please send the needed materials [copy of two first pages of passport and  info on place of birth (city and country), affiliation and position, office address, phone and fax numbers, place of visa application,  dates of arrival and departure, place of visa application] to the address larmih@gmail.com no later than September 15, 2017.