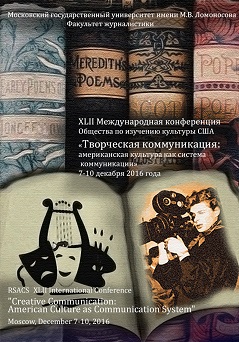 Cooperative Creativity in the Art of Opera in the late 20-early 21-st Centures: the Minimalists Composers Ph.  Glass and J. Adams with Theater Directors R. Wilson and P.Sellars (exemplified in “Einstein on the Beach”,”Nixon in China” and “Doctor Atomic”)

The dynamics of developing main themes and communication character of candidates with voters in the online version of USA Today (September – November 2016) during the US 2016 presidential campaign are considered in the report.

The analysis of politicians’ agendas (economic issues, taxes, migration problems, international relations) is based on 100 materials (news, analytical reviews, commentaries, interviews, sociological polls). Special attention is paid to the contexts in which names of Hillary Clinton and Donald Trump are mentioned.

One of the most popular US papers USA Today is «mainstream» mass medium. It forms opinions of average Americans and plays an important role in communications between political elites and electorate.

During the presidential campaign, the resource journalists did all their best to stay neutral. The elections results have been unexpected for the newspaper’s editorial board, as seen in commentaries and analytics.

American Culture in Multimedia Format in the Voice of America Coverage

American culture has always been and remains one of the most important ones for a leading American international broadcaster. One of its main tasks is to promote American culture in the world. This is the same in the present transition from radio to Internet broadcasting. In recent years the emphasis is on video, as it allows, for example, to quickly cover news, Hollywood news, cultural events and more. Traditions were established in the Russian edition of radio era and continue today.

Origin of Hypertext Journalism: a case study of the FEED magazine)

The 1990s was a time not only of dot.com boom, it was also a time of hypertext theory boom.  Branching nonlinear text with hyperlinks, which initially has been described by Ted Nelson, seemed to be more appropriate for the computer era then a linear text.  It is no wonder that hypertext theory had an impact on journalistic theory:  in the 1990s there were plenty of theoretical articles, which acclaimed a range of advantages of hypertext over print journalism.  The turning point for the development of hypertext journalism was the creation in New York in 1995 of one of the first online magazine – FEED.  The authors of FEED put into practice many Internet-specific features, which were described by hypertext theorists. Experiments with the interface, hyperlinks and forms of narrative have been here in the foreground.  But the results of these five-year experiments with nonlinear texts now allow to look very differently on the hypertext itself as well as on its possibilities for journalism.